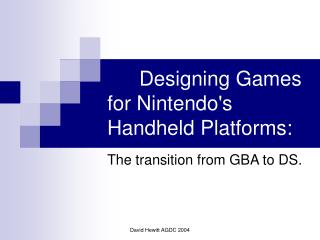 Designing Games for Nintendo's Handheld Platforms:. The transition from GBA to DS. Abstract. Games for traditional handheld platforms have always presented the designer with a set of challenges and opportunities quite different to those that the console or PC designer must face. Designing Computer Games - . what makes a good game. what is a game. not a movie it should be interactive, have control

Designing Games for Game Designers - Note : turn on “notes view” to see the outline of the talking points. several

Designing an Effective PowerPoint Presentation - . this is too small. design principles. 1. make the text big. this is

Designing PowerPoint Slides for Video - . powerpoint is a computer application used to produce support materials for

Designing games - introduction - . www.wouterbaars.net. definition of a game. a computer game is a software program in