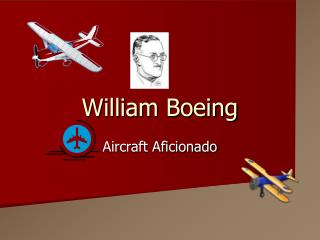 William Boeing. Aircraft Aficionado. When was Mr. Boeing born?. William Boeing was born in Detroit, Michigan in the year 1881 on October 1 st . His father was Wilhelm Boing, a german mining engineer who also was a timber merchant. Where did Boeing get educated?.

Boeing Field - . downbursts can be divided into two main types. macroburst: a large downburst with its outburst winds