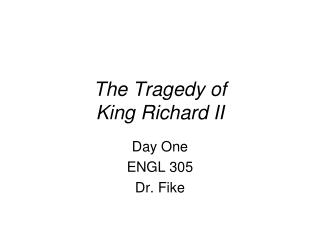 The Tragedy of King Richard II

The Tragedy of King Richard II

The Tragedy of Othello the Moor of Venice - . william shakespeare. themes. the reckless destruction of marriage by a

The Reign of “King Mob” - . andrew jackson as president. was jackson really a commoner?. was an anti-federalist, but

King Henry IV of England - . natalie alamo per. 3. about king henry the iv. king of england and lord of ireland reigned

The role of the Fool in King Lear - . harold

Shakespearean History - . war of the roses how did it

Richard II and The Order of Things - . first order of business : taming test. how would you rate the difficulty level of