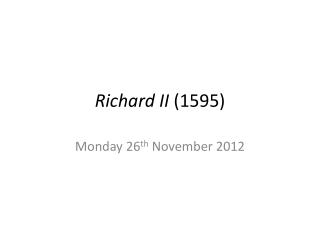 Richard II (1595) . Monday 26 th November 2012. Insert genealogy. [ DUCHESS OF GLOUCESTER] Fear not that, madam. England’s not mutinous; ‘Tis peopled all with subjects, not with outlaws. Though Richard (much misled by flatterers) Neglects and throws his scepter carelessly,

Officer Richard Neil (retired) - . 3-5 child abuse &amp; neglect. this is a hard topic area for anyone!. it should

Music: Arabesque - Richard Clayderman - . presented by: henry. the airport. the road to the city. the city. azadi square

Prayer - . finding the heart’s true home based on the book by richard j. foster. the ideas and concepts of this

William Shakespeare His poetry, world, and life - . “shakespeare’s genius had to do not really with facts, but with