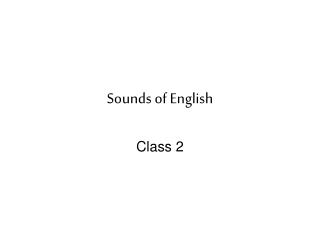 Sounds of English . Class 2. Sounds of English. Consonants: first, the stops: b as in bat, sob , cubby d as in date, hid, ado g as in gas, lag, ragged p as in pet, tap, repeat t as in tap, pet, attack k as in king, pick, picking. When we need to emphasize

44 Sounds of English - . each page has one sound( phoneme), showing its various written forms (graphemes), with examples.

Sounds of Poetry - . rhythm. the rise and fall of our voices as we stress some sounds more strongly than others. can be

Sounds of Oneness - . by marco missinato &amp; pamela jo mcquade open your heart…awaken your soul…ignite your

Sounds of Language - . spi 04018.8 recognize the sounds of language (i.e. alliteration, rhyme, and repetition). read the