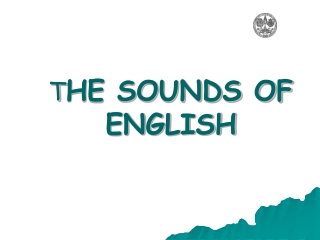 Sounds of English - . class 2. sounds of english. consonants: first, the stops: b as in bat, sob , cubby d as in date,

Chapter 7 Sound - . computer programming 2. objectives. find out how to prepare sounds for inclusion in microsoft xna

5 Rules for Predicting Sounds from Spelling in English by Matt Purland - . for more free worksheets and books for

AFFRICATES - . affricates are consonant sounds that begin by fully stopping the air from leaving the vocal tract, then

TEACHING PRONUNCIATION - . pronouncing the sounds of english native pronunciation is not the goal the goal: speaking

How to learn English pronunciation - . 1. learn the sounds of english. english uses different sounds than other languages

Representation - . literacy. as a culture becomes literate, it must design a representation system, an orthography