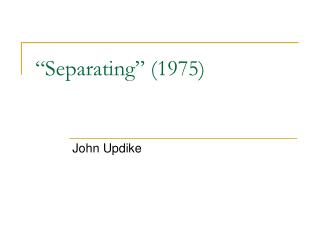 Separating Materials - . l.o: we will find out how to separate materials from water. which of these materials might

Separating Substances - . when substances are separated from mixtures they are said to be purified or refined. separating

SEPARATING MIXTURES - . chapter 3. separating mixtures. because substances in a mixture are physically combined, the

Separating Mixtures - . how do we separate …?. filtration chromatography centrifuging evaporating

Separating Mixtures - . what is a mixture?. when two or more materials or substances are mixed together but do not

Separating Arguments - . exercise. the answer to q3. the only proof capable of being given that an object is visible is

Kripke: Outline …(1975) - First improtant decision: the theory is about sentences, not about propositions. like

SEPARATING MIXTURES - . separating mixtures. discuss with a partner how you would separate the following mixtures… salt