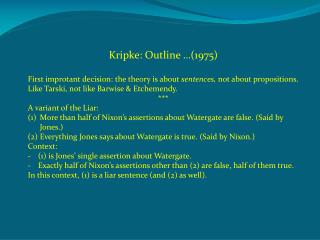 Kripke: Outline …(1975) First improtant decision: the theory is about sentences, not about propositions. Like Tarski, not like Barwise & Etchemendy. *** A variant of the Liar: More than half of Nixon’s assertions about Watergate are false. (Said by Jones.)

Other, more easily perceived letters suggest what words are on the tombstone and transparency. - The prototype model has

Ellen Ochoa - . by: jasna jaramillo. the beginning. born in may 10, 1958 in los angeles california humble family she grew

The History of Karate - Srka course 28 th march 2009 what do you already know? ? seiken ryu karate association from: