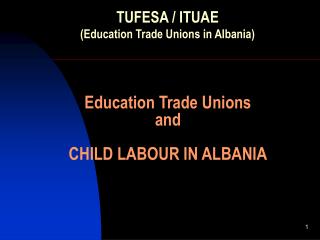 Labour Unions - . what is it?. an organization of workers that collectively promotes the interest of its member and

Labour Unions in Canada - . - with a focus on pro-sports labour unions -. graffiti. what are labour unions?. a labour

Labour Unions in Canada - . labour unions are organizations that represent canadian workers in their negotiations with

Labour Market Situation in Albania - . may 2005. the passage of albania on the market economy at the beginning of

Trade Unions - . d efinition. an association organised for the purpose of promoting and protecting the rights of

Trade Unions - . what is a trade union?. a trade union is an organised group of workers. its main goal is to protect and

Trade Unions - . read the bullet points as you go through the power points. can you write something about each? no - look

Trade Unions - 10th november 2011. trade unions. lesson intentions in this unit we are going to; -assess the purpose of

Trade unions - Warm - up: the nazi economy using the phrases in the bubbles (use each once only) to help you, write a