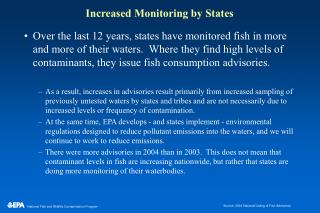 Increased Monitoring by States. Over the last 12 years, states have monitored fish in more and more of their waters. Where they find high levels of contaminants, they issue fish consumption advisories.

Increased Yield - Is your plant nutrition program keeping up with your corn’s yield potential? nutrisolutions ®: a new

States by the Letters - . by casey krogman. grade level &amp; standards. grade level: could fit 3 rd or 4 th (i