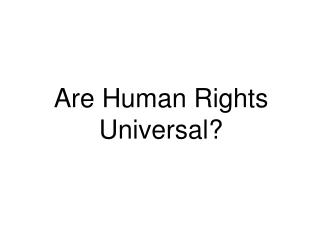 Promoting Human Rights and Education in Bangladesh P HREB - . human rights are not a privilege. as enshrined in the

UNIVERSAL DECLARATION OF HUMAN RIGHTS - . 10 december 1948. article 1. all human beings are born free and equal in

Human Rights in the UK - . what are your human rights? 3 minutes write down as many human rights you can think off.