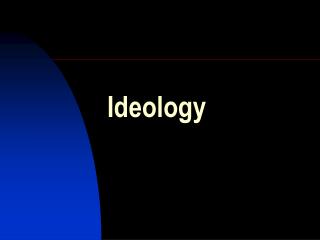 Ideology. The role of ideas in politics What people think and believe about society, power, rights, etc., determines their actions Everything has to pass through the mind of the individual before he or she acts How do the ideas and beliefs appear in our minds?

Ideology - The study of ideas, specifically the analytical study of the ideas that are held by a certain culture, class,

IDEOLOGY - Ideology in general. ideas that unify a society, dominant consciousness or a way of looking at things, a

Ideology - . what do we mean by ideology? it’s a system of ideas, which functions within a given society to make its

Ideology - Sense of superiority. socialism to save mankindsuperior to capitalism in two wayseconomic superioritythe more

Ideology - . the role of ideas in politics what people think and believe about society, power, rights, etc., determines

IDEOLOGY - Ideology etymology. idea" from the greek idein," to see. an archetype, a prototype. logy" from

Ideology - . the role of ideas in the political arena. unit goals. in this unit, we discuss the question of systematic

Ideology - . nazis believed in racial superiority believed that this was a scientific fact any groups below the aryans

IDEOLOGY - . the ideas of the ruling class. the ruling ideas:. ‘ the ideal expression of the dominant material