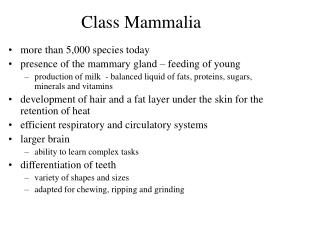 Class Mammalia. more than 5,000 species today presence of the mammary gland – feeding of young production of milk - balanced liquid of fats, proteins, sugars, minerals and vitamins development of hair and a fat layer under the skin for the retention of heat