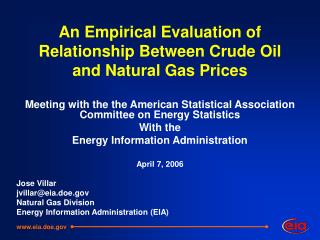 www.eia.doe.gov. An Empirical Evaluation of Relationship Between Crude Oil and Natural Gas Prices. Meeting with the the American Statistical Association Committee on Energy Statistics With the Energy Information Administration April 7, 2006 Jose Villar jvillar@eia.doe.gov The relationship between spot and contract gas prices - . asche, osmundsen and oglend university of stavanger, norway

An Evaluation of Oil and Gas Properties Guide - With a restoration rate of up to 100%, the experience of fire damage

OIL MARKET VOLATILITY : AN ECONOMETRIC ANALYSIS OF THE INTERACTIONS BETWEEN THE CRUDE OIL MARKET, THE GAS OIL AND THE