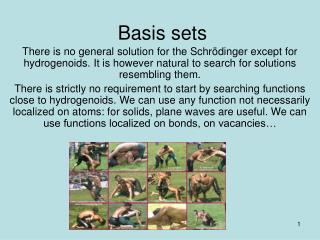 Basis sets. There is no general solution for the Schrödinger except for hydrogenoids. It is however natural to search for solutions resembling them. Basics of Quantum Chemistry - . todd j. martinez. “conventional” quantum chemistry. is dft the end of the story? no!

Basis Sets - . with:. {  μ } – a set of known functions. for uhf wave-functions two sets of coefficients are

Recap on Basis Sets - . pablo ordejon icmab-csic. basis sets in siesta. generated from the solution of the free atom

Basis Sets - . patrick briddon. contents. what is a basis set? why do we need them? gaussian basis sets uncontracted

Sets and Functions - Set notation. sets and functions. a set is a collection of objects (usually numbers). notation.