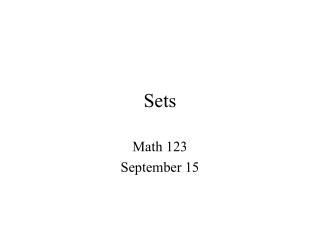 Sets - . a. b. lecture 1: sep 5. c. this lecture. we will first introduce some basic set theory before we do counting.

Sets Defined - . a set is an object defined as a collection of other distinct objects, known as elements of the set the

Sets and Set Operations - . objectives. determine if a set is well defined. write all the subsets of a given set and

Sets - . sets. a set is a well-defined collection of values of the same kind (objects) objects can be numbers, people,

SETS - . sets are lists of items that have specific members. brackets { } are used to denote a set. the elements of the

Learning Objectives for Section 7.2 Sets - . after today’s lesson, you should be able to identify and use set

Sets and Functions - Set notation. sets and functions. a set is a collection of objects (usually numbers). notation.

Discrete Mathematics SETS - . what is a set?. a set is a unordered collection of “objects” people in a class: {a yşe

Sets: An introduction - . coming upâ€¦ probability. in our study of probability, two things will be of great use to

SETS - Objectives: by the end of class, i will be able to: identify sets understand subsets, intersections, unions, empty

Sets and Set Operations - . objectives. determine if a set is well defined. write all the subsets of a given set and

3-5 Working With Sets - . objective: to write sets and identify subsets. to find the complement of a set. 3-5 working

Math 5 Unit Review - . instructor: mrs. tew turner. in this lesson we will review for the unit assessment and learn test