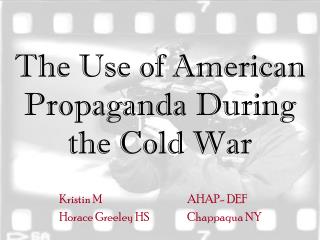 The Use of American Propaganda During the Cold War

The Use of American Propaganda During the Cold War

Anti-Communist Propaganda in the 1950s - . brianna strausser and juan colorado. in the 1950s, americans used fear to keep

The Cold War - . aim: how does “fear” affect society during times of war?. cold war. the cold war was a decades-long

Cold War Propaganda - . introduction. reached its heights in the 1950s and 1960s significant attempts to demonise

The Cold War - . the ussr vs. the usa. canada and the cold war. the cold war was a war of words, propaganda, espionage

Cold War in the Media - . background. the campaign of truth was started under truman. “objective-sounding news” to

Anti-Communist Propaganda - . by kaymoni kent &amp; laura whitfield. what is propaganda ?. propaganda is a type of