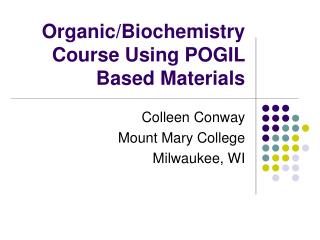 How To Go Organic: - . what you need to know to certify your horticultural crops. organic certification: the basics. the

Module 1 - . introduction to e-learning. objectives. in this lesson you will learn: what is organic food ? organic food

Organic Chemistry - . organic chemistry: the study of carbon containing compounds. prior to 1828 , organic compounds can

Organic Molecules for Physiology - . the main groups of organic molecules we will be covering include the: carbohydrates

organic eggs store - Organic eggs come from chickens that are fed certified organic feed. these chickens are supposed to