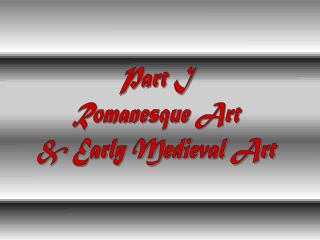 Part I Romanesque Art & Early Medieval Art Welcome to a study of Early Medieval &Romanesque Art, one of a series of styles that developed in the Middle Ages, also known as the Dark AGes What did the Medieval landscape look like? http://www.fordham.edu/halsall/maps/mapquiz.htm Medieval Art and Architecture - . romanesque medieval architecture. the duomo in pisa, italy. chapel of st. john at the

Medieval Art and Architecture - . questions. what is art? what is architecture?. art. medieval art reflected many

EARLY MEDIEVAL ART IN THE WEST - . 500-1000 ce. animal style : generic term for the characteristic ornamentation of