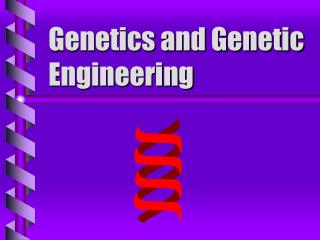 Genetics and Genetic Engineering. terms. agar- porous gelatin like material used as a support matrix for living cells in artificial environments . centrifuge. device for separating substances on the basis of density. clones.

Genetics and common genetic disorders - . by. constance. genetics. genetics is the study of heredity. heredity is the

Quantitative Genetics and Genetic Diversity - Footprints of diversity in the agricultural landscape: understanding and

Genetic Engineering - . biotechnology &amp; recombinant dna technique. it is the methods scientist use to study and

Genetic Engineering - . “amazing schemes within your genes”. what is genetic engineering?. moving small pieces of dna

GENETIC ENGINEERING - . what is it? what are the advantages (pros) and disadvantages (cons)? what is your opinion?.

Genetic Engineering - . genetic engineering. the process of making changes in the dna code of living organisms. can be

GENETIC ENGINEERING - . introduction. for thousands of years people have changed the characteristics of plants and