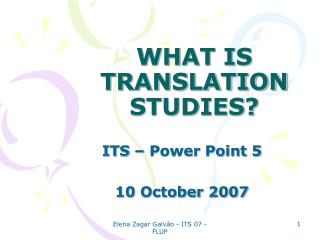 WHAT IS TRANSLATION STUDIES?

WHAT IS TRANSLATION STUDIES?. ITS – Power Point 5 10 October 2007. Brief historical overview. TRANSLATION as an academic subject is only about 50 years old. Before: T was mainly used for language teaching (thus secondary status in academia) 1960s-1970s: communicative approach in TEFL

WHAT IS TRANSLATION STUDIES?

Unit A1 What is Translation? - . meltem camlibel. q1: is translation a process or a product?. the concise oxford english

How to avoid a Sociology of Translation without Translations? - . towards a sociological construction of the individual

“Harmful strategies to Translation Studies and its practice: localization and crowdsourcing ” - Gl/tran 5100:

KINDS OF TRANSLATION - . literal versus idiomatic form-based kinds of translation: meaning-based form based is to follow

CL938 Translation Studies in Theory and Practice - . issues of untranslatability. what might be “untranslatable”?.

TRANSLATION ETHICS - . more than you see in the codes. what is translation?. ethics. qualifications confidentiality