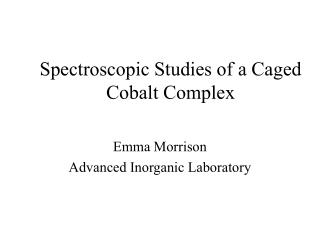 Spectroscopic Studies of a Caged Cobalt Complex. Emma Morrison Advanced Inorganic Laboratory. The purpose of this experiment was to synthesize a caged cobalt(III) complex and compare the electronic and nuclear magnetic resonance spectra against those of the un-caged template complex.

Cobalt - . by: jordan dollarhide . element and symbol. cobalt got it’s name by a man named george brandt in 1735,but

Caged Bird - . by: ritik sharma. the poem. a free bird leaps on the back of the wind and floats downstream till the