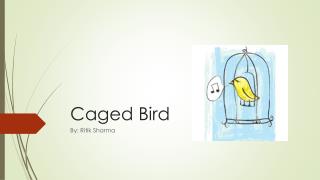 Caged Bird. By: Ritik Sharma. The poem. A free bird leaps on the back of the wind and floats downstream till the current ends and dips his wing in the orange sun rays and dares to claim the sky.

Some publications pertinent to this talk: - Seeing the world through the nose of a bird: exploring the sensory ecology of

Avian Influenza: Bird of a Different Feather A Primer to Pandemic Influenza Preparedness - . office of surveillance and

Blues Ain’t No Mockin Bird by Toni Cade Bambara - . please think about these questions and answer with “yes” or

Spectroscopic Studies of a Caged Cobalt Complex - . emma morrison advanced inorganic laboratory. the purpose of this