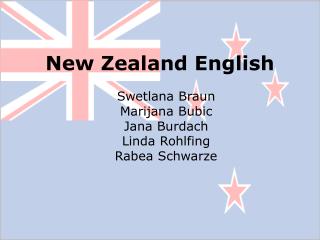 New Zealand - . images/descriptions. important facts. the capital of new zealand is wellington. the population is

New Zealand - . indistinguishable from australian to british and americans; and many australians hear it as simply

New Zealand - . by cehan ahmad. map of the world. new zealand. there are three main languages - english, maori and new

New Zealand : - . “a nation that continues year after year to spend more money on trade marketing than on programs of