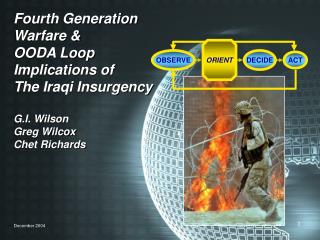 WWI – Trench Warfare - What life was like in the trenches…. wwi – trench warfare. diagram of wwi trench:. where

Irregular warfare What are the trends ? what is the threat ? Is this war ? - . fourth generation warfare. rpg. islamic

Four Generations of Warfare - . the first generation runs roughly from 1648 to 1860. war of line and column tactics,

Warfare in Mesopotamia - . two empires of mesopotamia. mesopotamia was always being conquered by new armies. why? because

Gas Warfare - . gas warfare:. aims : identify the types of gas used during world war one, examine the effectiveness of

Amazonian Warfare - . laura zanotti may 1, 2008. amazon as a warscape. is there any connection between current

Fourth Generation Warfare - . the history of terrorism as a strategy of political insurgency section 6. the sling and the

Fourth Generation Languages and OR extensions to SQL - . university of california, berkeley school of information