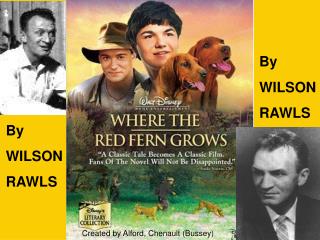 By WILSON RAWLS. By WILSON RAWLS. Created by Alford, Chenault (Bussey). Published in 1961. Author Wilson Rawls grew up in the Ozarks during the Great Depression, and spent his childhood much like the protagonist, Billy Colman. About the Author. Born Woodrow Wilson Rawls in 1913 Summer of the monkeys By : WILSON RAWLS

Where the Red Fern Grows by Wilson Rawls - . billy coleman wants hunting dogs more than anything in the world. read about

Where the Red Fern Grows By Wilson Rawls - . mrs. good. independent. “i told you grandpa,” i said, “i was saving my

By Esme Wilson - Year 6 english project. by esme wilson. my creative writing. as sky made nim’s bed then sam’s, she

By Ava Wilson - Need for speed. by ava wilson. testing the speed of a traxxes remote control cars. big question . will a

By Amy Wilson! - Stop racism!. by amy wilson!. what is racism?. racism is treating someone differently or unfairly