What are Prions? - PowerPoint PPT Presentation 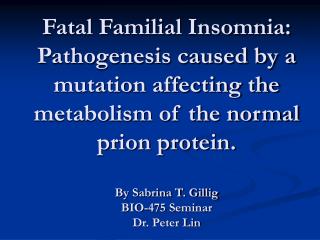 Prion Disease: Causes, Symptoms, Daignosis, Prevention and Treatment - Prion disease is a disease in which a kind of

Prions - . alicia arguelles, jerry wang may 4, 2007. what are prions?. pr oteinaceous i nfectious particle an infectious

Prion Diseases - . presentation, epidemiology, guidance and management. welcome to this module on prion disease. these

Creutzfeldt-Jakob’s disease or Prion Disease or Mad Cow disease - . it belongs to a group of neurodegenerative diseases

Chapter 13 Viruses , Viroids , and Prions - . not all pathogens are cellular!. many infections of humans, animals,

What are Prions? - Fatal familial insomnia: pathogenesis caused by a mutation affecting the metabolism of the normal

Treating Insomnia in Older Adults - Almost half of all older adults report problems with insomnia, defined as difficulty