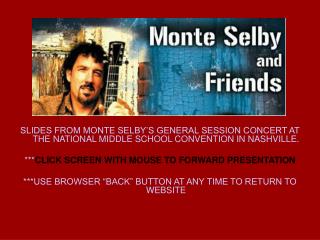 SLIDES FROM MONTE SELBY’S GENERAL SESSION CONCERT AT THE NATIONAL MIDDLE SCHOOL CONVENTION IN NASHVILLE. *** CLICK SCREEN WITH MOUSE TO FORWARD PRESENTATION ***USE BROWSER “BACK” BUTTON AT ANY TIME TO RETURN TO WEBSITE. SONG: MIDDLE SCHOOL MATTERS. SONGWRITERS:

An Introduction to Monte Carlo Methods for Lattice Quantum Field Theory - . a d kennedy university of edinburgh. model or