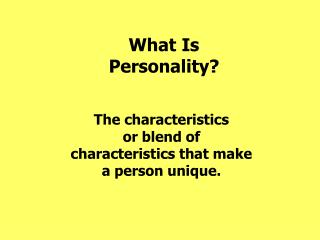 Personality - . psychology 2012 – fall 2003. introduction: what is personality?. an individual’s unique and

Psych 1: Personality - Theories of personality including psychodynamic, behavioristic, traits and

Subclinical Personality Traits - . what are subclinical traits?. personality scales used were not designed for detecting

Personality Development - . what are the four main factors that affect the development of personality? how does isolation

Personality Barbara Mackessy - . the visible aspects of one’s character as it impresses others, distinctive