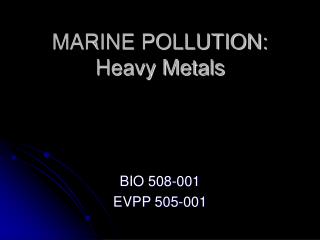 MARINE POLLUTION: Heavy Metals. BIO 508-001 EVPP 505-001. What is marine pollution?. According to the UN Group of Experts on the Scientific Aspects of Marine Pollution (GESAMP):

Heavy metals migration - . 4(iii). aims. (i) to understand the distribution of heavy metals in the environment and

Marine Pollution - The introduction by man, directly, or indirectly, of substances or energy to the marine environment

First Meeting of the Expert Group on Heavy Metals under the Convention on LRTAP / WGSR, - International working groups on

Pollution and the Marine Environment - . pollution. the introduction by humans of substances, materials, or heat energy