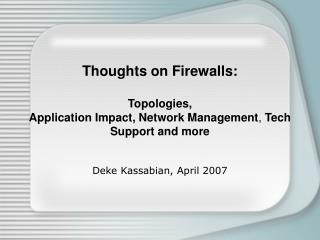 Thoughts on Firewalls: Topologies, Application Impact, Network Management , Tech Support and more Deke Kassabian, April 2007 Opening Statements Common desktop & server operating systems are getting better, but are still not network-safe in their default 'out of the box' configuration.

So you want to start a private practice: some thoughts - . judy ripsch, ph.d., l.c.s.w. intro. intro self (who made me

Internet Security and Your Computer - . welcome to boot camp. or how to surf the web safely. without becoming paranoid.

Techniques and Principles in Language Teaching - . yueh-chiu helen wang. introduction. the actions are the techniques and

Chapter 17: Therapy - . while focusing on several intrusive thoughts that had been bothering her recently, jenny was

Discernment of Spirits - . asking what and why about our thoughts and feelings resulting from and leading to our activity