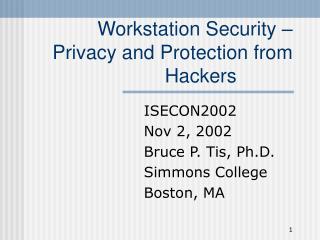 Privacy and Security: - Everyday computing: understand the transformation of everyday life as computing is

Workstation, Server and Network Security - Learning how to secure information systems. learning by doing there is really

Protection and Security - . protection is any mechanism for controlling the access of processes to the resources of a

Security (and privacy) - . larry rudolph with help from srini devedas, dwaine clark. who cares about security?.

Protection and Security - . an overview of basic principles. protection and security. issues : authentication:

Security and Privacy - . paranoia. how much computer communication can be considered private? how likely are we to put