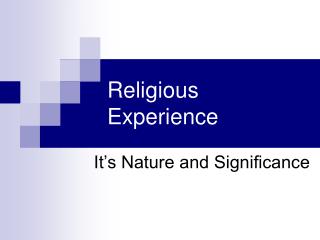 Religious Experience. It’s Nature and Significance. Experience and Inference. Sense experience is “direct perceptual awareness” of a material being. Statements can describe or express the content of our experience Example: “I hear voices in the hallway.” (Alston, SP).

The Bible in one Year - . biblical history. chief purpose is to communicate a religious message, not to record events

Spirituality and Stress - . definitions of spiritual health. adherence to a religious doctrine ability to discover and

Scripture - . rosie ferrer and helen crowder. in this presentation we will look at:. propositional and non propositional