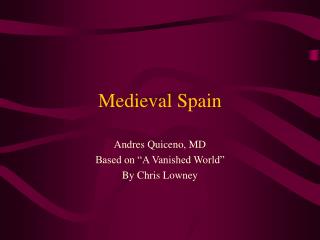 Medieval Spain. Andres Quiceno, MD Based on “A Vanished World” By Chris Lowney.

Medieval Spain and Russia - . spain. located on the iberian peninsula formerly part of the roman empire islam spread to

A Brief look at Medieval Spain - . the first thing we need to understand is the reconquista. this was a long and bloody

Medieval - . by: e.r.johnson. christianity and medieval society. the church shapes politics and society. clergy - the

Medieval Castles/Medieval Life - . by catherine walsh. in the castle. castles were owned by the rich king / queen castles

MEDIEVAL - . philosophy. plan. the character of the medieval philosophy the main features of the middle age philosophy

Medieval - Science and technology. new weapons were developed in ww1 meaning new technology had to be developed to treat