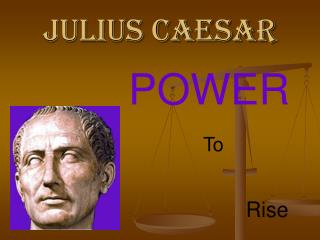 JULIUS CAESAR. POWER. To. Rise. The Early Years. Born in 100 B.C. to Aurelia (mom) and Gaius Julius Caesar (dad) and grew up in the Republic during days of the Marius/Sulla struggle He is the only son, but apparently had 2 sisters named Julia Major and Julia Minor (really?)

Julius Caesar Acts IV-V - . act iv. octavius and mark antony go through a list of possible enemies and decide which

Julius Caesar Obituary - . divide the class into six groups. each group plays the role of one of the following: group #1

Julius Caesar - . and the end of the roman republic. changes in roman life. slavery—upper class was afraid—treated

Julius Caesar - . a tragedy in 5 acts by william shakespeare. characters. julius caesar. not the main character

Terms for “Julius Caesar” - . eq: how can i identify and analyze the characters, themes, and structures of a

The Rise of Julius Caesar - . part 3. he soon became a member of the senate. in 70 b.c., pompey and crassus were the new

Julius Caesar - Act i quotes. julius caesar. cobbler. “a trade, sir, that, i hope, i may use with a safe conscience,

Caesar Comprehension and Text Evidence - . for each questions below, complete answer a in english, based on your reading.