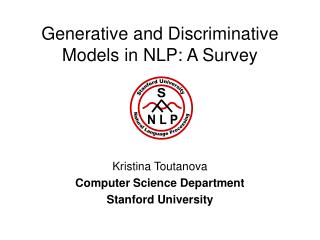 Generative and Discriminative Models in NLP: A Survey

Generative and Discriminative Models in NLP: A Survey

Models of Recombination - . fogel and hurst. 1967. meiotic gene conversion in yeast tetrads and the theory of

8.1-Variation Models - . a is the constant of variation direct variation as x ↑, y ↑ ( multiplication if y alone)

Generative Somatics - . study days july 28, 2012. what is somatics ?. somatics is a path, a methodology, a change theory,

Ngram models and the Sparsity problem - . john goldsmith. the task. find a probability distribution for the current word