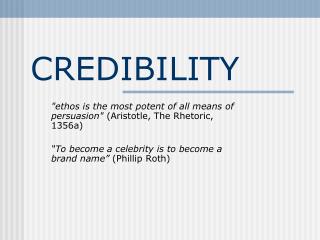 CREDIBILITY. "ethos is the most potent of all means of persuasion" (Aristotle, The Rhetoric, 1356a) “To become a celebrity is to become a brand name” (Phillip Roth). What is Credibility?.

Credibility of Sources - . how can you tell if a source is going to be credible or reliable ?. primary sources. a primary

Credibility Theory - . it is a new branch of mathematics that studies the behavior of fuzzy phenomena. baoding liu

Credibility is the Foundation - . what people look for and admire in leaders. desired leader attributes. honesty

Credibility - . evaluate claims and their sources identify interested parties credibility in media and advertising. why

Credibility is the foundation on which leadership is built - . leadership. credibility. 4 most commonly cited elements of

Credibility - . who and what can one trust? is it fact or reliable information?. what is credible?. claims-are they

Credibility of sources - . nis aktobe , 2013. criteria of credibility (raven). expertise (does the source have

Bias and Credibility - How can i tell?. bias and credibility. definition of