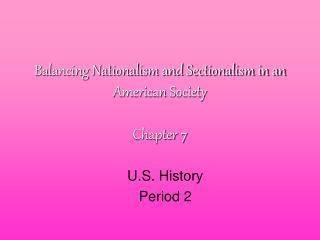 Balancing Nationalism and Sectionalism in an American Society Chapter 7

Balancing Nationalism and Sectionalism in an American Society Chapter 7

THE AMERICAN REVOLUTION - . chapter 7. the early years of the war. section 1. americans divided. american society was