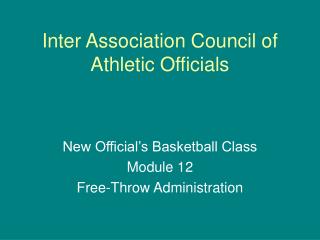 Inter Association Council of Athletic Officials New Official’s Basketball Class Module 12 Free-Throw Administration Throw-In Administration At the completion of this Module the student should: Know the proper positions of the officials Know where each official starts on a throw-in

Interpretations of prose and poetry - . learning outcome: by the end of the lesson we will be able to discuss the

Database Administration: The Complete Guide to Practices and Procedures - . chapter 1 introduction: what is a dba?.