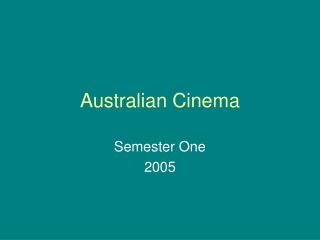 Early Cinema - . lecture 2. basic terms. frame (2 senses) parameters of the image one frame of a film strip still image a

Unit 6 Going to the Cinema - . guess the film according to the role’s clothes and the cues. this is a story about a

Feminist Cinema of the ‘80s and ‘90s - . patricia l. pecoy mll 235. major movements of this period. birth of feminine

The Australian outback - . map of australia. climate. australia is on the tropic of capricorn. it rarely rains in

Year 12 aUSTRALIAN FILM - . gallipoli . australian film: gallipoli. film techniques a. explain how each of these

Would you like to try Australian Food? - . presentation made by the students of the 9 th form. people say every nation