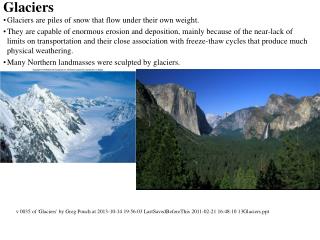 Glaciers. Glaciers are piles of snow that flow under their own weight. They are capable of enormous erosion and deposition, mainly because of the near-lack of limits on transportation and their close association with freeze-thaw cycles that produce much physical weathering.

Glacier Basics - . an introduction to where, how, and why glaciers form. what is a glacier?. large mass of moving ice

Glaciers - . quiz. percentage of earth’s surface covered by glaciers today. 10%. but, much more extensive in the

Glaciers - . in this weeks lessons we will be investigating glaciers and how they erode, transport and deposit material.

Glaciers - . what are glaciers? glaciers are thick layers of ice that move over land. they cause weathering and erosion.

Glaciers - . what is a glacier?. glacier- a large moving mass of snow and ice. where are glaciers found?. how are

Glaciers - . what is a glacier? a thick mass of ice accumulated over a long period of time, that is able to flow. types

Glaciers - . by: adrene gray. glaciers. 75%of the earth fresh water is in the form of glaciers glaciers have ice on top

Glaciers - . glacier erosion. a glacier is a large, moving mass of ice that are found in either high elevations or near

Glaciers - . chapter 7.1. the ice age. believe it or not, at one time nearly 30% of the earth’s surface was covered in

Glaciers - . a glacier is a thick mass of ice, composed of compacted and recrystallized snow that forms over thousands of

Glaciers - . formation of glacial features an ice block with sediment representing a glacier will be placed in a

Glaciers - . ch 13. introduction. glaciers are masses of ice which move over land by plastic flow and basal slip.

Glaciers and Glaciation Physical Geology, Chapter 22 - . glaciers and earth’s systems. a glacier is a large,