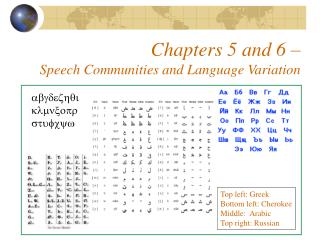 Language Variants - . a single language varies according to:. idiolect = the unique characteristics of how a given

LANE 422 SOCIOLINGUISTICS - . summarized from sociolinguistics an introduction to language and society peter trudgill 4

Variation 1 - . variation. differences between members of the same species are referred to as variation. in this

Speech Acts &amp; Language Functions - . pragmatics not only language structure is rule governed – language use is,

Language and social variation - . chapter 19. sociolinguistics. the way one speaks provides clues not only to a person

LANGUAGE VARIATION - . speech communities. basic definition:. a group of people steadily in communication with one