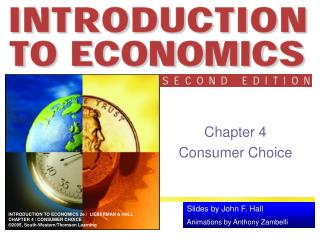 Chapter 4 Consumer Choice. Consumer Choice. Basic Principle #1: Maximization Subject to Constraints The economic approach to understanding a problem is to identify the decision makers and then determine what they are maximizing and the constraints that they face

Perspective on Consumer Behavior Chapter 4 - . objectives. to understand the role that consumer behavior plays in the

Household Behavior and Consumer Choice - . we have studied the basics of markets: how demand and supply determine prices Chapter 4 Motivation and Values - . by michael r. solomon. consumer behavior buying, having, and being sixth edition.

CH04 Capturing the Requirements - . understanding what the customers and users expect the system to do * the requirements