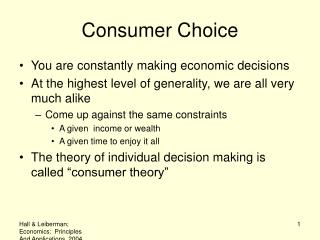 Consumer Choice. You are constantly making economic decisions At the highest level of generality, we are all very much alike Come up against the same constraints A given income or wealth A given time to enjoy it all The theory of individual decision making is called “consumer theory”. Definition of Consumer Behavior - . individuals or groups acquiring, using and disposing of products, services, ideas, or