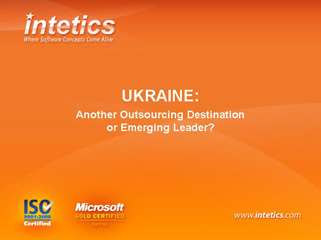 The presentation highlights the latest social and economic trends in the country, discusses why Ukraine is becoming an emerging offshore outsourcing leader based on its industry growth and its access to a skilled well educated talent pool. A case-study describing cooperation between Intetics and Aginity companies is presented as an example of successful project implementation by the Ukrainian development office.

Outsourcing for Small Businesses - This is a slide deck, which we've created for a chameleon pa, is a short introduction

Issues with Emerging Contaminants in Water - . what are “emerging contaminants”?. ppcps and edcs pharmaceuticals

Emerging Adults - . who? when? where ? why ? so what?. jerry beavers p resbyterian a ssociation of c ollegiate and h