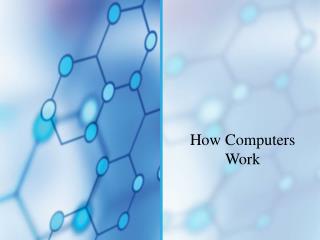 How Computers Work. You Will Learn…. That a computer requires both hardware and software to work About the many different hardware components inside and connected to a computer How the CPU works and how it communicates with other devices. Hardware Needs Software to Work. Hardware

Packers And Movers Inside Noida - Noida can be forwarded as the societal location from of india. this vent out from noida