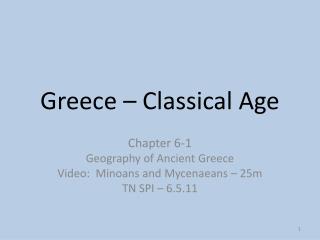 Greece: Resource Unit - Introduction to greece. when one looks around our culture, the influence of ancient greece

Review for Greece - . 1. the mainland of greece is: a. a mountain b. coastal c. a peninsula d. an island 2. which sea

Greece - . economic. people in greece will continue to enjoy a laid-back lifestyle with the government taking care of

Introduction to Ancient Greece - . geography of greece . greece is a small country in the south-east of europe. near the

Welcome to the state of Greece - . written by danielle kitrilakis. this is the map of greece. this is the location to

Persia and Greece - . greece and persia. it is a big mistake in many studies of this subject to look at greece and not

Classical Greece and Rome - . an adventure of epic porportions. greece. greece is located on mountainous peninsulas in

Ancient Greece - . 2000-146 b.c.e. geography. greece is a peninsula about the size of louisiana in the mediterranean sea.

Greece - . by cillian tracey. introduction greece is a country in south east europe and borders bulgaria, macedonia and

Greece - . the map of greece. greece’s currency is the euro. there are over 6000 islands and islets that belong to

Greece - . a brief background. geography. greece is located on the continent of europe, to the east of italy in