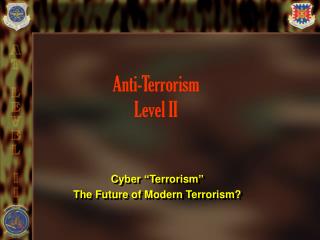 ANTI-TERRORISM - . terrorism defined. the calculated use of unlawful violence or threat of violence to inculcate fear;

Global Anti-Terrorism Monument - . your counter-monument design and how you arrived at the final version… introduce the

Anti-Terrorism International Working Group - . the atiwg charter is to create an incose-wide product(s), which

Chemical Facility Anti-terrorism Standards - . since 2003, the department of homeland security (dhs) has been working

Level II Exam - . issued july 2006. if you are not taking the exam. please make sure you pick up your proof of attendance

ADVANCES IN ANTI - TERRORISM &amp; SECURITY TRAINING STANDARDS - . about us. shadow close protection is a hellenic