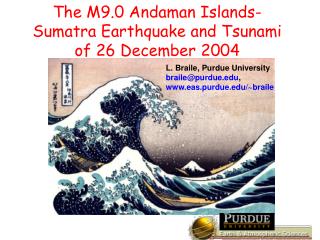 The M9.0 Andaman Islands-Sumatra Earthquake and Tsunami of 26 December 2004

The M9.0 Andaman Islands-Sumatra Earthquake and Tsunami of 26 December 2004

Earthquake Hazards And Earthquake Risks in the Central US - . or, what keeps geologists awake at night…. earthquake

The M9.0 Andaman Islands-Sumatra Earthquake and Tsunami of 26 December 2004 - . discovery lecture, dept. of earth and

AN ASSESSMENT ON THE EFFECTS OF THE TSUNAMI ON THE MALAYSIAN CORAL REEFS - . zulfigar yasin, anisah lee and aileen tan

TSUNAMI - . a tsunami is a disaster that can kill people. some tsunamis are disaster. tsunami. what causes tsunami to

Tsunami Preparedness Week - . how a tsunami works. an underwater earthquake occurs when a plate shifts abruptly and

Six years after Fukushima - On march 11, 2011, a 9.0 magnitude earthquake set off a massive tsunami and meltdowns at the