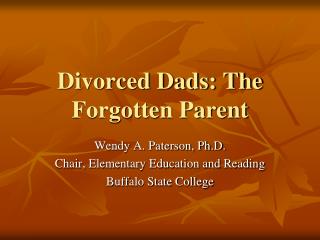 Divorced Dads: The Forgotten Parent. Wendy A. Paterson, Ph.D. Chair, Elementary Education and Reading Buffalo State College. Experiencing Divorce . “There are always three sides to the story: yours, mine and the truth.”

Shattrath : The Forgotten City - . the hope of revitalizing a once epic city. by: heather r. brinkman. the history of

7.1 Do Now - . use a table of values to graph . graphing exponential growth functions with shifts. 1) identify the

HCS BILLING GUIDELINES - . you can find the newest version on the dads website:.